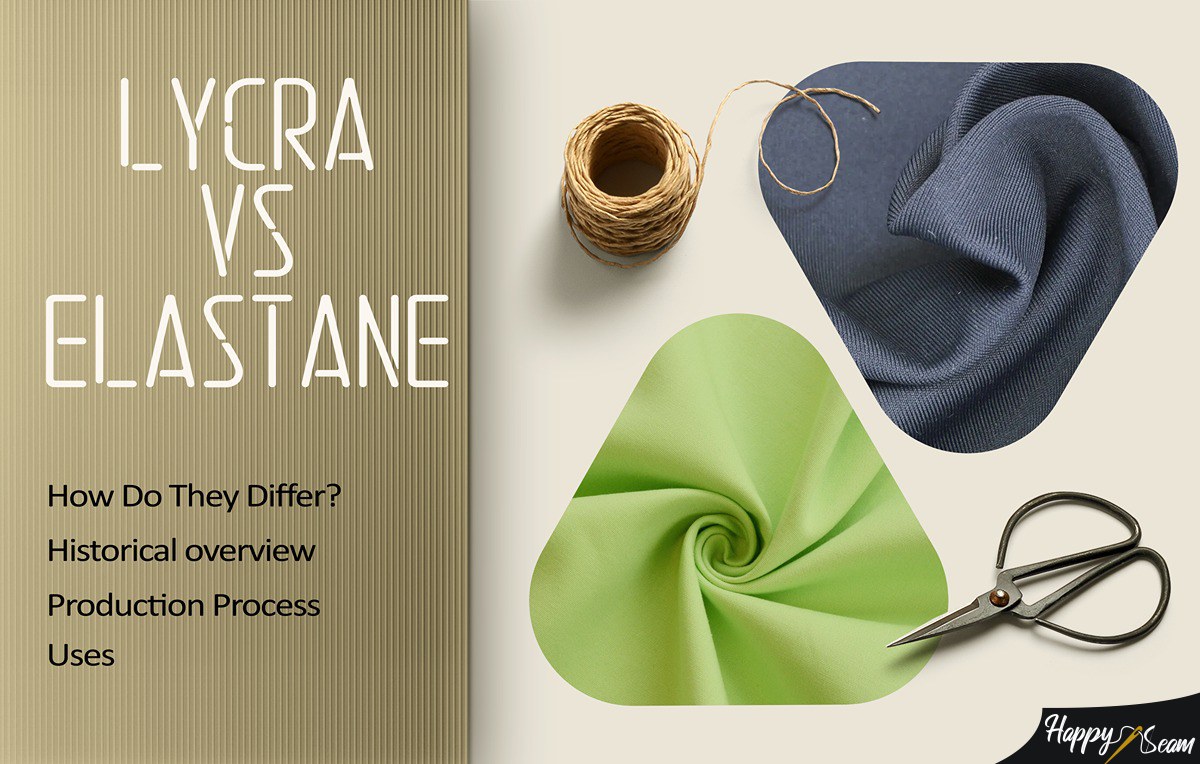 The majority of people who enjoy being comfortable in their own skin, frequently look for clothing that is stretchy and well-fitted when they are shopping. Lycra is a material made out of a fiber called elastane. Oftentimes, there is a common misconception among customers when it comes to determining whether there is a difference between lycra and elastane.

Lycra vs. Elastane – How Do They Differ?

The name ‘’lycra’’ was invented in a laboratory by a chemist called Joseph Shivers at DuPont’s Company. Lycra was adopted as a name used for a fiber thread that is very stretchy. Lycra serves as a term to make brands attract attention when they are being promoted and to show off the uniqueness of their products.

This term is used to describe particular products that have lycra in their blend. Elastane is a synthetic fabric from which lycra is produced. This material is known for its stretchiness and high elasticity. Because of the fact that lycra is made from elastane, it is often associated with strength and durability. The stretchiness and durability of lycra is a result of its blend with spandex and other fibers as well as being produced from elastane. This synthetic material is characterized by its elasticity and flexibility which make it comfortable to wear on the skin.

The terms “lycra” and “elastane” have their specific purposes in the textile industry. Lycra is used as a brand name for various different products manufactured by companies whose goal is to stand out when compared to other brands. The name ‘’lycra’’ is known to describe a product, and if a company uses lycra to produce their own clothing pieces, they usually name it to be a “Lycra product”.

The term “lycra” is used by various manufacturers in different countries in order to personalize their brands. Lycra is a synthetic fabric originating from the United States and developed by the DuPont Company. Since its development, lycra has remained to be a highly popular fabric used in the production of various pieces of comfortable clothing. In comparison, elastane was originally produced in Germany during the Second World War by a scientist called Otto Bayer. In the beginning, the idea was to create a material that would serve as a substitute for the rubber material.

The invention of this new material was needed for the creation of various projects during the war. However, Bayer accidentally produced an elastic fiber called elastane. After the war ended, the DuPont Company created lycra out of elastane. These two terms differ in the way they were invented but ultimately they are dependent on each other.

Lycra and elastane also differ in the way they are produced. To create lycra, Joseph Shivers used a pre-polymer as a base element. This element goes through a chemical process in reaction with acid. Then, the mixture undergoes a process of getting thinner and it is placed in a cell to produce fiber. The cell then spins and the elastane fiber gets heated to create sturdy strands. The strands are clumped together and eventually twisted. To treat the material, polymers are used towards the end of its production, the yarn of the lycra is then weaved and ready to use.

Elastane fiber can be produced using several different methods such as spinning by utilizing a chemical reaction, wet or dry spinning using a solution, or by melting the polymer using high heat. All of these methods are effective for the precise production of elastane. The term lycra is used to refer to a material made out of elastane, whereas elastane is the name of the fiber from which lycra is made.

Apart from the historical and production differences, these two contrasting terms are used to refer to the same stretchy material. However, the term elastane cannot be labeled as being owned by someone, whereas the term lycra has been adopted by the DuPont Company. Lycra is famous for its durability, stretchiness, and elasticity. It is also highly moisture absorbent which makes it appropriate for physically active people in need of sportswear.

Lycra does not trap sweat or unnecessary moisture, leaving the skin feeling comfortable throughout the day. In addition, because of its resistance to salty water, lycra is also suitable for the production of swimwear. Apart from producing workout clothes and bathing suits out of lycra, manufacturers also use it in the production of underwear and loungewear. Clothing pieces made out of 100% elastane can stretch up to eight times in comparison to their original size. When elastane is blended with fragments of other materials, it adds more stretch to the items which ultimately leads to providing the customers with a comfortable yet durable piece of clothing.

Elastane is also blended with other materials to provide more breathability and durability to the item. High-quality pieces made out of elastane, such as leggings, sporty t-shirts, or running shorts, can be stretched numerous times without losing their original shape. Many pieces of clothing on the market contain lycra or elastane because of the flexible elastic fibers which lead to the production of flattering clothing.

Even though lycra and elastane are basically the same material, there are slight differences between them. Elastane originates from Germany, whereas lycra has been developed in the United States. There are differences in the way they are produced because lycra is a synthetic fabric made out of elastane, while the name of the synthetic fibers is called elastane.

Lycra is used as a brand name for elastane fiber, famous for its elasticity, stretchiness, and comfortable feel on the skin. Elastane is a universal name to refer to fabrics with a brand name such as lycra. Despite the small differences, lycra and elastane need each other to create ideal pieces of clothing.

A Brother BM3850 review, which is a terrific machine, may be found if you want to read some more blogs.

A review of the Juki DU 1181N is also included. Additionally, you can read a comparison of Lycra vs Spandex.

Can You Iron a Tie? (Guide & Explanations)

What Does Line Dry Mean? (How to & Explanation)