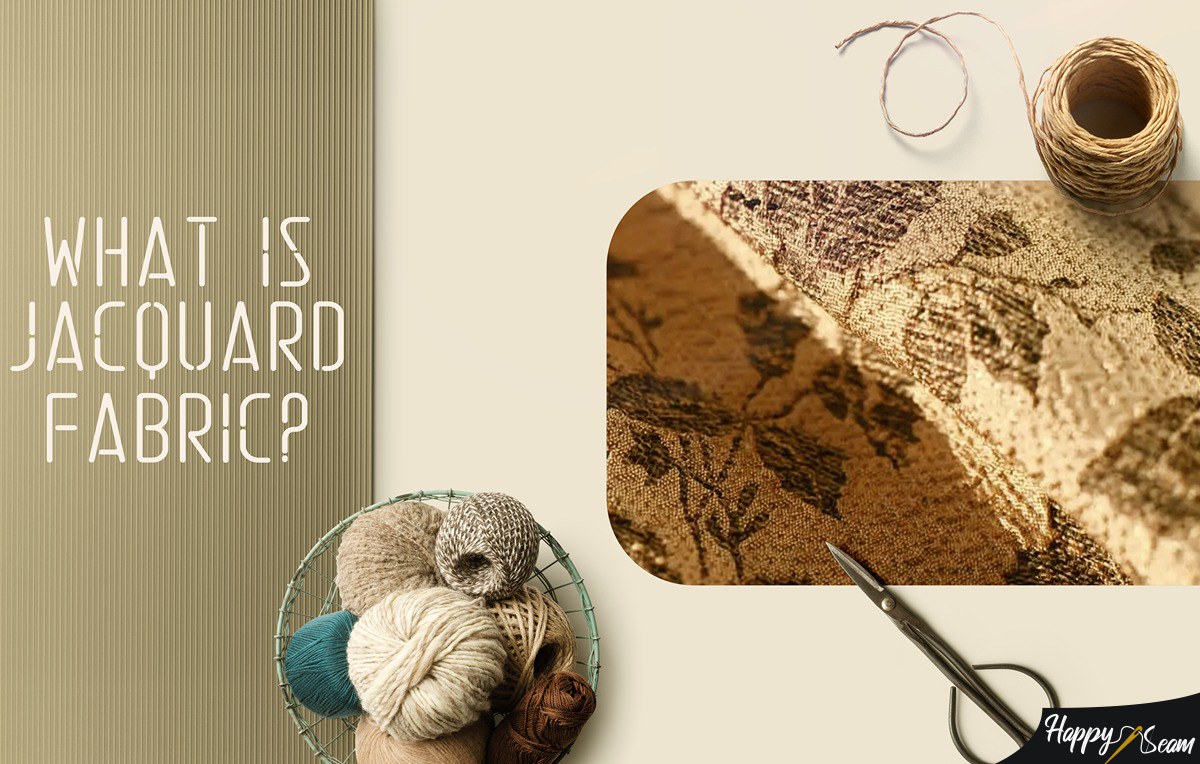 Starting from the name Jacquard this fabric might have seemed intriguing at first. Thus, the question “What Is Jacquard Fabric?” has interested you. Even though the name itself sounds fancy and the pieces manufactured using the thread are often posh, the explanation is quite straightforward. However, to fully understand what Jacquard is, we will need to dive into its attributes as well.

This will offer you, the reader of this article, a thorough understanding of the fabric, ensuring that the next time you have a dilemma about it, you will possess a clear definition of Jacquard. Let us not waste any more time and get right into it.

What is Jacquard fabric?

Jacquard is a fabric made out of cotton consisting of synthetically woven threads that portray complex patterns in the appearance.

To answer this question in more detail, we first need to go back in time to the 19th century when Jacquard was first invented. More precisely in 1804, a French merchant with the same name was in need of a woven patterned design that gave off an intricate feel.

The look of Jacquard fabric was made possible by using cotton thread. Although today the appearance of Jacquard can be achieved by blending polyester and sating with the previously mentioned cotton.

So, to gather all this information into a single definition we can say that Jacquard fabric is a synthetically woven thread made originally from cotton to display complex patterns that give off a high-class feel.

How is Jacquard fabric made?

Considering the knowledge that was presented of the invention of Jacquard you may wonder how the fabric was made possible in such an era.

The creativity of Jacquard machinery is quite fascinating. Jacquard fabric is made through a loom which is a device that is indented for weaving tapestry. Due to this the machine itself is known as a Jacquard loom. Although in today’s time the Jacquard loom has of course gone through various changes to ease the manufacturer’s labor the essential use of it has remained the same.

This device made it possible to implement any delicately detailed design into the desired item. Transforming the cotton or any other thread like acrylic to yarn then by use of the loom into a chosen woven pattern.

The main traits that make Jacquard fabric so popular are its stability when stress is applied to it, the resistance it has again wrinkling and the versatility it has to be intertwined with various threads. These are Jacquard’s main selling points and the reason why it is so used in numerous settings.

However, the other parts of Jacquard fabrics’ traits depend on the main component that is used to create it. Different blends will produce different attributes. A simple example of this is the Jacquard loom that is woven from linen making the fabric more breathable than normal cotton Jacquard. So, in a way, Jacquard elevates the look of an already existing material while at the same time giving it more properties.

Since the traits of a Jacquard piece depend on the main weave you may start to wonder how many variations are there out in the industry. Well, the answer is plenty. The core thread used is of course cotton, cotton blends, linen, wool, silk, and polyester blends. All of these produce diverse assets for different purposes while maintaining the essential traits of the weave that is used.

The utilization of Jacquard fabric

Due to Jacquard being able to be created by various threads its utilization will also depend on that fact. This also brings a great advantage to Jacquard fabric since it can be used in a range of settings.

The use of Jacquard in the apparel industry is widely known. What most people don’t realize is that the variety of threads creates a mixture of fabrics that are often unknown to some and that the core is Jacquard adaptations. This makes it possible to use the fabric as casual or evening wear, in fancy clothing, handbags, couture, and so on. Because of the prominent feel that Jacquard’s designs provide, they are the first choice for use in items that the creator wishes to feel luxurious. The usage of this fabric in clothing debarments is as endless as the creativity of the tailors and designers.

The feel that Jacquard fabric gives off is also used in the house. Of course, due to the effort in labor, it takes to produce well-made home items from Jacquard fabric the cost is usually high. These high-end designs can be seen in all parts of the house though. Starting from bedroom or living room accessories such as pillowcases and duvets to curtains and kitchen items you can find Jacquard in all classy and posh-designed patterns.

As mentioned, the utilization of Jacquard depends on the creator themselves since the fabric itself can be easily implemented on every given occasion.

One of the key defining features of a fabric is the impact it has on the world around us. This principle is also important for Jacquard fabric. Because it was created in such a classical era, most people would assume that it would be harmful to the environment, because, let’s face it, consumers at the time did not consider the ecosystems’ safeness as much as we do today.

However, in the majority of cases, Jacquard is surprisingly a very degradable fabric. Although the harm it may cause the environment will depend on the main thread that it is created from. This means that Jacquard fabric usually made from cotton, silk or wool is exceptionally environmentally safe.

Also Read: A Comparison of Jeans and Trousers

Hopefully, you now have a better understanding and a simple definition of this interesting widely used fabric known as Jacquard. Even though the material may be on the more expensive end of the price spectrum, the texture it creates makes it worthwhile. All in all, Jacquard fabric is a wonderful invention that was quite advanced for its time, but nowadays we truly appreciate it.

Can You Iron Silk? How It Should Be Done

Bernette B38 Review: Feature-Rich Yet Affordable