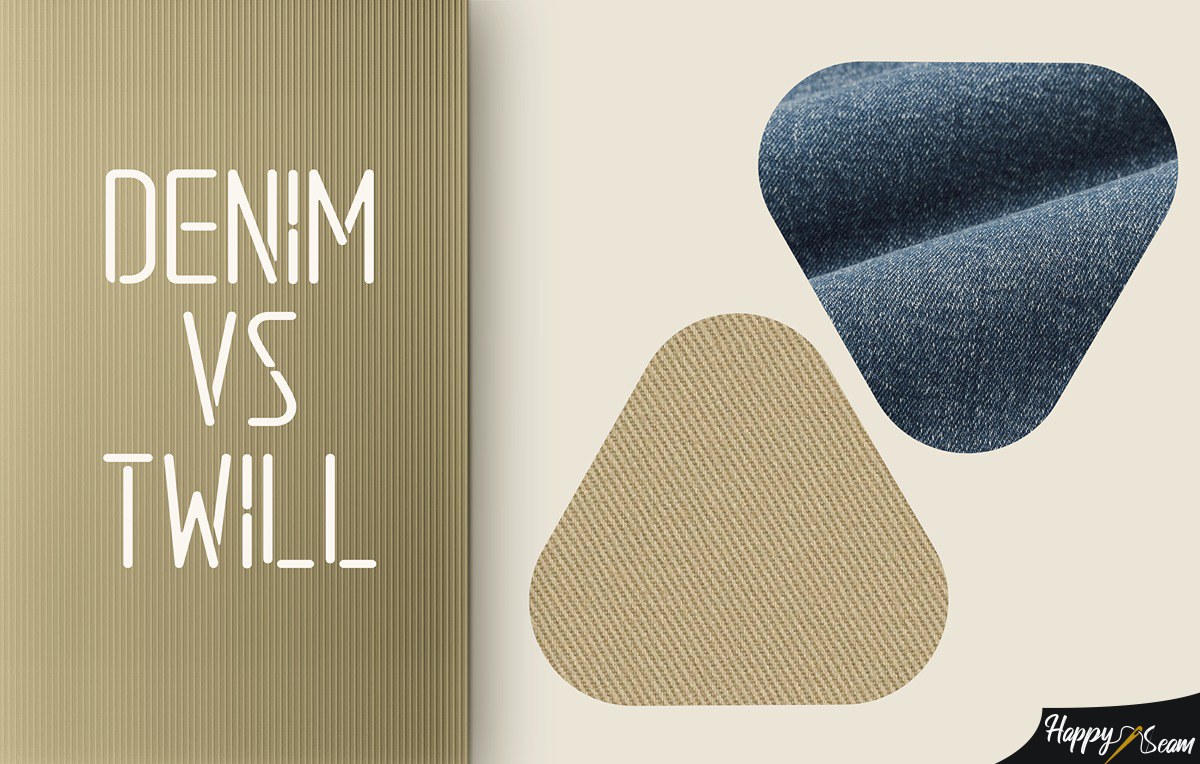 The world of textiles offers numerous possibilities to choose from as well as different patterns that offer versatility and different types of fashion styles.

Certain textiles may look very similar or identical in some way, shape, or form but each of them is unique in its own way. Denim vs Twill is truly an intriguing topic, and we’re going to see why.

Denim vs. Twill – How Do They Differ?

Denim and twill are well-known and famous fabrics that are most commonly used in the production of versatile pieces of clothing. They can provide similar looks while at the same time being characterized as durable and fashionable.

However, there are certain differences between denim and twill which are connected to their process of production, dyeing their threads with color, and also the different levels of breathability on the skin they offer while being worn.

Although both of these fabrics can be used in the production of clothing, denim is more suitable for making pieces of clothing that can be worn over and over again without decreasing their level of quality and durability, such as the classic blue jeans that almost everyone has in their wardrobe.

Also, feel free to read a comparison of denim vs. chambray.

Aspects In Which They Differentiate

The weave pattern of both denim and twill has a tendency to appear very similar. However, there are certain differences between these two fabrics when it comes to their process of production and manufacturing.

Denim is a fabric that is produced from natural cotton fiber which eventually goes through a process of thread spinning. The threads are then dyed in the characterized blue color and the production process of the denim fabric is finished by applying certain remedies to make it more durable.

The production process of twill usually begins by blending the natural cotton fiber with fragments of synthetic materials. It is woven in such a way that creates crossways giving it the famous look of twill.

There are slight differences in the production process of denim and twill but they are often referred to as being identical or very similar because they contain cotton in their properties.

One characteristic that distinguishes denim from the various different textiles that are available on the market is its blue color. During the production process of denim, the threads are dyed blue and used to produce denim pieces of clothing in various shades of blue.

There is dark blue denim, light blue denim, washed blue denim, and many more variations that offer versatility and many options to choose from. In comparison, twill is usually dyed in various different colors.

Although denim can also come in different colors, the process of dyeing twill is much easier because of its weave type. Twill is also famous for retaining its original color even after it has been extensively worn and constantly washed, whereas the color of certain pieces made out of denim can easily fade after some time of wearing and washing.

When it comes to the correct maintenance and trying to avoid the color from fading these two fabrics, it is important to properly take care of them which will ensure their longevity.

Both denim and twill can be dyed in different colors, but twill has a slight advantage when it comes to retaining its original color or shade.

Feel free to also read the differences between denim and canvas.

Wearing comfortable and breathable pieces of clothing is very important for almost everyone. Clothing can be produced from twill and provide a lightweight and loose fitting feel on the skin while at the same time being long lasting and durable.

In comparison to twill, denim is characterized to be less breathable because of its structured texture and rigidness. Because of its lack of breathability, the denim fabric can also stick to the skin and cause unnecessary moisture as well as unpleasant odors which can be hard to get rid of.

The denim fabric is also known to have no stretch if it is not blended with synthetic materials which further leads to it lacking the feeling of breathability. However, high-quality denim can be breathable and also durable at the same time just like twill.

The twill fabric is known to be more breathable and has more stretch when it is compared to a fabric such as denim.

Feel free to read the differences between modal fabric and cotton.

All in all, denim and twill have some similarities which can lead to people’s confusion about whether they are actually the same material. However, these two fabrics differ in a couple of ways that make them unique while standing on their own because they provide a different look and feel on the skin.

Twill is more breathable and versatile in regards to the varieties of different colors it can be produced in when it is compared to a fabric such as denim which is known to be more rigid and one-dimensional. Both of these fabrics have their positive sides and that is the reason why people are interested in buying denim and twill.

Cotton vs. Wool: Which One Is Better?

Spandex vs. Cotton: How Do They Differ?