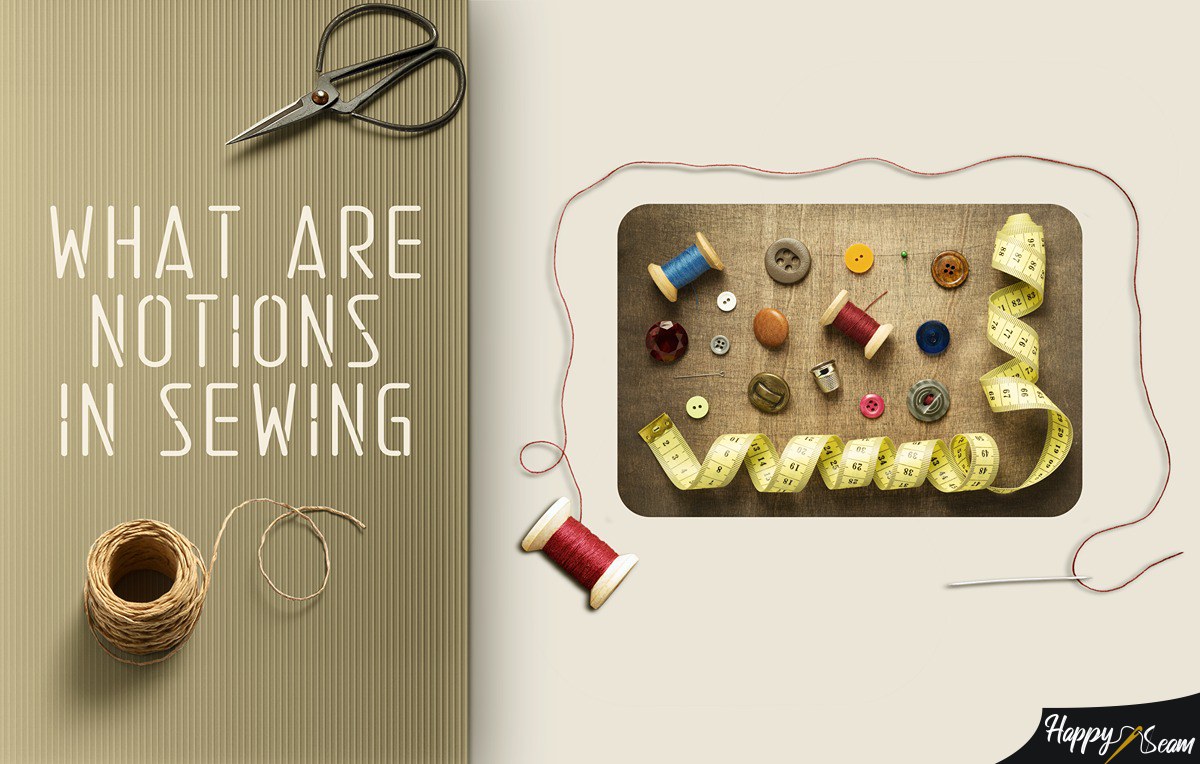 Sewing is a very entertaining process for many people. Apart from using a piece of fabric for sewing, certain different additions and appliances are also needed for successfully finishing your project.

These different attachments are necessary because the sewing machine is an equipment with a specific purpose. A successful project could not be created without the use of notions, which will also allow you to express your creativity in the process of sewing.

What Are Notions in Sewing?

Notions in sewing is a generic word for utensils that are needed to finish a sewing project such as needles, buttons, and zippers.

Apart from these notions that are most commonly used in sewing, there are also others that exist for embellishing purposes such as decorative types of threads and different cutting tools.

How are Needles Used as Notions in the Process of Sewing

Needles are special types of utensils that can be used for hand sewing and also machine sewing. They are some of the most basic notions that are familiar to almost everyone that is interested in sewing.

There are many different sorts of variations associated with needles which have been constantly produced for different intentions when it comes to sewing.

A particular sewing enthusiast and fanatic is usually familiar with the various types of needles that exist and are used as notions in sewing.

Because of the huge variety of different kinds of fabrics that exist and are constantly worked on by sewing professionals and devotees, some of them require the use of distinct needles.

Threads and fabrics can differ in accordance to their levels of density and bulkiness. For this reason, using a needle that has the ability and power to endure the strength of those particular fabrics is needed in the process of sewing.

In addition, needles as notions in sewing exist in many different sizes and forms, thus each of them is known to have a particular intention in the process.

It is important to have a general knowledge and at least a basic understanding of the various different types of needles in order to properly use needles as sewing notions and finish your project.

You can also read a fantastic list of industrial sewing machines.

The Usage of Buttons as Sewing Notions

Some of the most versatile sewing notions that exist and are available to purchase occur in the form of buttons.

These notions in sewing can be used for creating unique and individualistic projects because of their multi-functionality.

The most common use of buttons as sewing notions refers to its attachment and securement purposes.

The threads are sewn with the use of needles in order to add the buttons on the fabric and thus provide security and practicality when the project is finished.

Another popular use of buttons is for embellishing purposes. In the past, people saw buttons as pieces that can be collected and sold as antiquities because of their beautiful designs.

Nowadays, buttons are used to make projects look more edgy and sophisticated without the need of using complicated sewing techniques.

Buttons can be found in many different shapes, designs, and sizes as well as being produced from various different textiles.

Therefore, buttons are beautiful little attachments that allow the expression of creativity when they are used as notions in the process of sewing and are useful for achieving more than one purpose.

Zippers as Sewing Notions in the Process of Fastening

You can also read about accessories a tailor need on his sewing machine.

The use of fasteners such as zippers as sewing notions requires the need of a foot for pressing down designed specifically for attaching zippers.

These notions in sewing bring inventiveness to a project and provide necessary fine tuning.

During the process of sewing zippers, it is very important to be mindful of their practicality and performance to a particular degree. The most common purpose of sewing zippers on a project is to provide their ability to be opened and also closed.

In the process of sewing, some people also use zippers as sewing notions solely for providing a specific appearance to the project.

Certain zippers that are sewn on clothing cannot actually be opened or closed. Instead, they serve only for embellishing purposes.

Zippers can provide various different features to a project which is why they are frequently used as sewing notions.

They deliver an ability to secure the piece of clothing in its place, as well as unfasten it whenever it is needed.

You can also read a fantastic list of coverstitch machines.

Different sewing notions have been used for many years in order for the process of sewing to be fun and entertaining.

Adding small attachments and fasteners to your projects brings individuality to the particular piece that is being created and allows you to express yourself through sewing.

The use of sewing notions is known for its versatility and the encouragement of creativity.

Which is Best Fabric for Making Aprons? (Explained)

What to Do with Old Sewing Machines? Full Guide