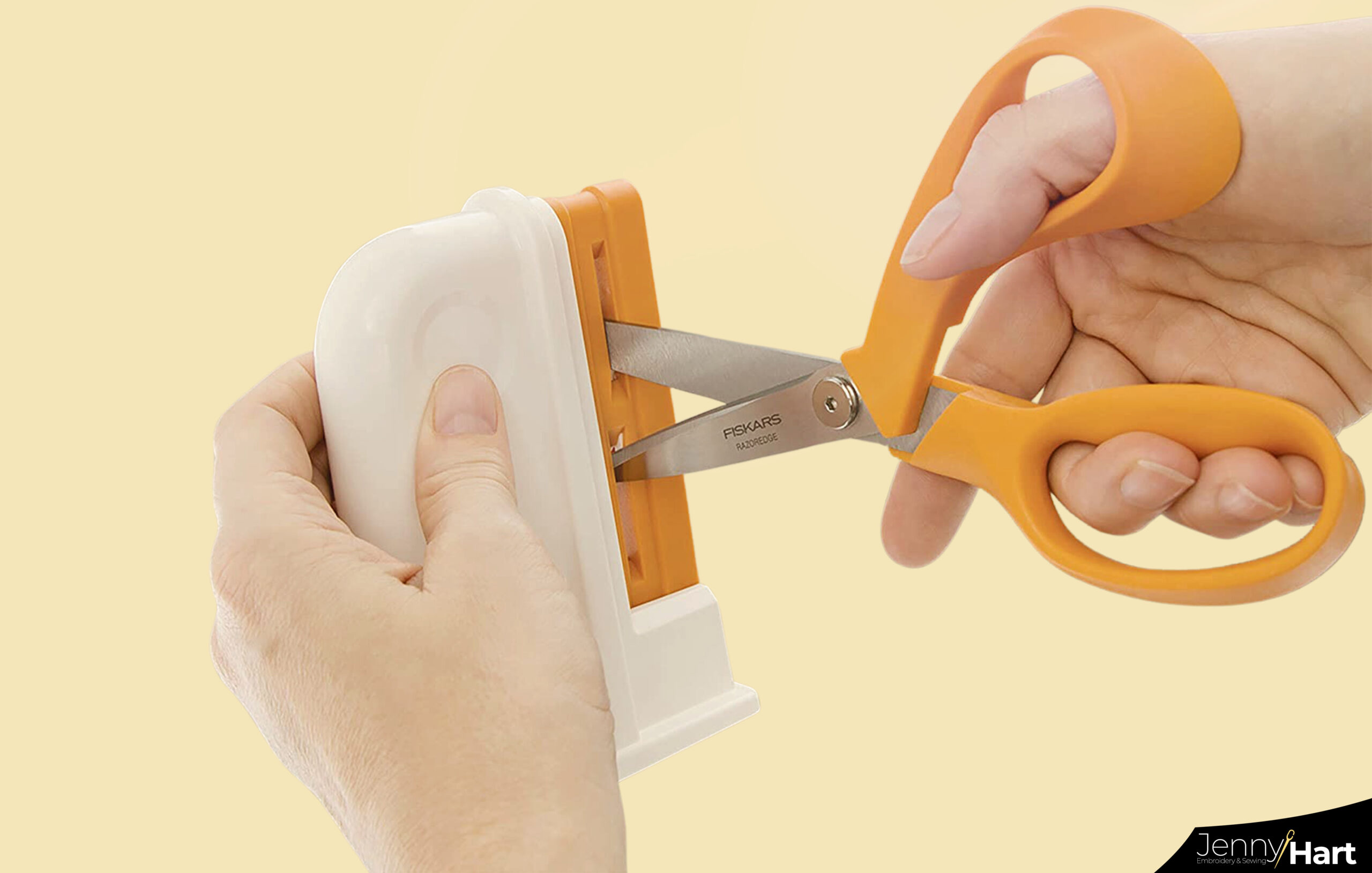 If you’ve ever had to reach out for your scissors because you needed to cut cardboard for a craft project you were working on or open a mailing envelope only to realize that their blades were blunt, then you know how irritating and frustrating this can sometimes be.

However, rather than tossing your scissors in the garbage every time you notice they’ve worn out and replacing them with a new pair, you can deal with this problem by using a scissors sharpener.

Since there are many scissors sharpeners available on the market, in what follows I’ve compiled a list of the best ones so that you can choose. Let’s hope you find the ones that meet your needs on your own.

A Quick Look at My Favorite Scissors Sharpeners

If you’re searching for a scissors sharpener that’s lightweight, compact, and easy to use and that will allow you to sharpen your scissors quickly without worrying that you might hurt your hands while working with it, search no more. The Smith’s JIFF-S 10-Second scissor sharpener is the right tool for you.

What makes this scissor sharpener one of the best sharpening tools is its design. In addition to allowing you to hold it easily, the plastic handle of this tool serves another purpose. The handle is where the scissors sharpener is positioned.

This sharpener allows you to make your blunt scissors as good as new with just a few strokes thanks to the round, compact rod made of ceramic included in it, no matter if they’re right- or left-handed scissors.

Moreover, this sharpener is also great for sharpening knives from different angles thanks to the two reversible carbide blades positioned on its right side.

The only disadvantage this tool has is that if the grinding angle isn’t suited to your scissors, this can cause a lot of metal to be taken off from the blades.

If you’re looking for a scissor sharpener that is easy to use and can keep your scissors in a good state for longer, this is a great choice for you. Additionally, you can use it to sharpen your knives.

Being manufactured by the renowned corporation Sharpal Inc, which specializes in producing different types of sharpeners, the Sharpal 104N 5-in-1 scissor sharpener is on this list rightfully.

In addition to having a specific, sophisticated design and being easy to use, this tool is durable, highly versatile, and great for sharpening different types of scissors fast thanks to the tungsten carbide blade positioned between the two pairs of carbide and ceramic slots used for sharpening knives.

One feature that makes this product stand out from the rest of the brands of scissors sharpeners is that both the base and handle have a rubber covering, which contributes to the stability of the tool and makes it comfortable and easy to hold and use.

I think that the only thing that some may perceive as this sharpener’s weakness is that it weighs  0.71 pounds, which makes it a bit heavier than other standard scissors sharpeners. However, the weight of this sharpener can also be considered an its advantage since it allows you to control the tool more easily and use it safely.

If you’re looking for a tool that could help you make all your blunt pairs of scissors and knives super sharp again quickly and effortlessly, this sharpener is ideal for you.

3. Fiskars SewSharp Scissors Sharpener   – Best For Working With On The Go

I would have made I mistake had I not included the Fiskars SewSharp scissor sharpener in this list.

What this tool requires you to do to make your dull scissors sharp and as good as new again is just to place the blades of the scissors in the plastic slots at an appropriate angle and then, withdraw them while applying slight pressure. Once you repeat these steps several times, you’ll be amazed by the sharpness of the blades.

Another cool thing about the Fiskars SewSharp Scissors Sharpener is that it’s lightweight and works well on different types of scissors, such as paper scissors, sewing scissors, and crafting scissors with straight blades.

There are two things that may be considered weaknesses of this sharpener. The first one is that you might be required to run the blades of your scissors 10-40 times through the two openings to get the best results. And this tool’s second weakness is that it’s not very suitable for sharpening zigzag scissors.

This scissor sharpener is ideal for anyone who is always on the go. Having a compact and lightweight design makes it easy to carry along wherever you go. Additionally, it gives scissors a fine, sharp edge in 5 minutes.

It’s time to introduce you to one of the best-selling scissors sharpeners – the Fiskars Desktop Universal Scissors Sharpener. And now, let’s explain why this is so.

As its name suggests, this tool can be used on various types of scissors, except for serrated scissors, scissors with wider blades, and pinking shears, to restore and make their blades razor-sharp. Moreover, it equally works well on right-handed and left-handed scissors.

Another great thing about this product is that it’s compact and lightweight, which means that it easily fits into tight spaces and that you can always be accompanied by it when travelling simply by putting it into your carry-on bag.

One more cool thing about this tool is that its two cutting slots allow you to place the scissors’ blades properly into them, which, in turn, lets you optimize the sharpening process and get the best results.

If you’re looking to buy a scissor sharpener that can help give the blades of your favorite scissors a sharp edge and extend their lifetime, this tool will certainly tick off all of your boxes.

Here it is – the Smith’s Jiffy-Pro Handheld Sharpener, which many, including me, consider the best scissors sharpener.

In addition to having a simple and lightweight design, this tool is built to maximize performance and produce desired effects every time it’s used. It’s also easy and safe to work with.

The Smith’s Jiffy-Pro Handheld Sharpener is designed with a rubber handle, which allows you to hold the tool easily, steadily, and firmly. The handle is also the place where the two sharpening slots and ceramic rod are included – the two things that allow you to sharpen right-handed and left-handed scissors effortlessly and effectively. Moreover, the rod is designed to conform to the beveled edge of blades.

What I like about this sharpener the most is that it allows you to make your scissors or knives razor-sharp even if you don’t insert the blades in the sharpening slots at a proper angle since it’s designed with a preset angle for sharpening.

Another thing that makes this tool stand out from the rest of the scissors sharpeners is that it’s manufactured from materials of high quality, which makes it more durable.

This sharpener is also versatile since it’s great for restoring blunt blades of knives and giving them a sharp cutting edge thanks to the carbide blades and ceramic rods included in its design.

One more reason why this tool is the best is that you can use it to keep already sharp scissors and knives in good state. Besides this, you can use it at home and in the outdoors as well.

If you’re searching for scissors or knife sharpener that’s sold at an affordable price, is easy to hold and use, and gives the best results, this is the tool that fits this description.

Choosing the right type of scissors sharpener is a prerequisite for restoring blunt scissors, giving them a sharp cutting edge, and extending their lifespan. So, to help you choose the scissors sharpener that can meet your needs and expectations, in what follows, I’ve included a buying guide that contains the most essential aspects you should consider before buying this type of tool.

What Material It’s Made Of

In order to avoid buying a new scissors sharpener every month, make sure, the first time you buy this type of tool, you choose one that’s manufactured from high-quality stainless steel or plastics and includes carbide blades and ceramic rods.

In order to protect yourself from getting injured when using a scissors sharpener, choose one that doesn’t have its blades exposed. Also, those sharpeners that can be placed on a tabletop tend to be safer to use than those that can’t.

What Type Of Sharpener It Is

Moreover, some sharpeners are designed to work on other different kitchen and outdoor tools in addition to scissors, which saves you from spending extra money on a bunch of different sharpeners with a single purpose.

Some scissors sharpeners allow you to restore blunt scissors by sliding their blades through their sharpening slots only a few times, whereas others may take a while to do their purpose. So, when buying a scissors sharpener, choose one that can provide the best results quickly and that doesn’t require a lot of effort.

When shopping for a scissors sharpener, choose one that is lightweight and compact. Such a design contributes to a firmer and more comfortable grip and allows you to store the sharpener in tight spaces and carry it with you wherever you go.

How Often Should Scissors Be Sharpened?

The answer depends on how often you use your scissors, what you use them for, and whether you clean and oil them regularly. But generally speaking, to keep your scissors sharp and in good shape, it’s best to sharpen them once or twice a year.

Can Scissors Be Sharpened With A Knife Sharpener?

Since many knife sharpeners are designed with multiple sharpening slots so that they can suit different blades, the answer is yes. However, to obtain optimal results, it’s best to sharpen your scissors using a scissors sharpener, as it was made to perform that function.

What Is The Fastest, Most Effective Way To Sharpen Scissors?

As I’ve already mentioned, using a scissors sharpener that’s designed with carbide, ceramic, or diamond blades and a ceramic rod allows you to sharpen scissors quickly and effectively.

Regardless of which type of scissors sharpener you may choose to buy from the list given above, you can be sure that you won’t make a mistake. I also hope that you’ll find the buying guide I’ve presented here useful and learn something valuable from it.

You can do some further reading if you like what you have read so far.

There’s a comparison blog that explains the differences between rayon and modal. Another blog explains step by step how to close an ironing board.

There’s another one that tells you if you can shrink nylon, and I also have included the alternatives to zippers on another one.

If you wonder if you can iron wool, you can find that out too.

Is Polyester Hotter Than Cotton (Answered)